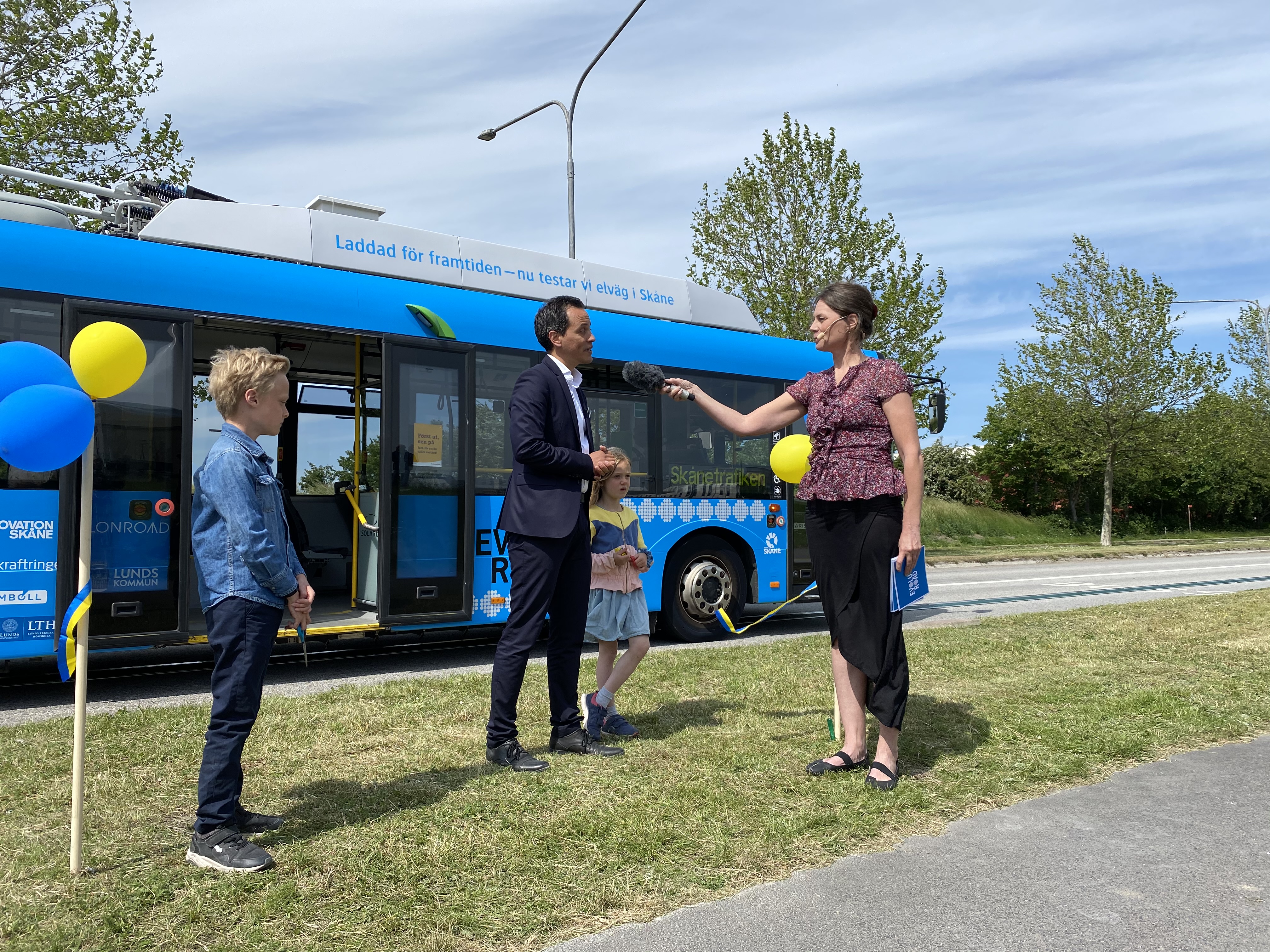 The next-generation electric road inaugurated in Lund by southern Swedish consortium – with Minister for Energy and Digital Development, Anders Ygeman

Picture: Philip Sandberg, Mayor of the city of Lund, inaugurated the ERS together with Jonatan Nilsson and Maia Nilsson.

On Thursday, the next-generation Electric Road was inaugurated in the city of Lund in southern Sweden. Behind the initiative is a private-public Swedish consortium, Evolution Road, which is supported and financed by the Swedish Transport Administration (Trafikverket). The goal is to test and gain more knowledge about electric roads, a climate-smart technology that allows electric vehicles to be charged from the road while driving.

At the inauguration, among others, Minister for Energy and Digital Development, Anders Ygeman, participated.

– In order to achieve the climate goals, electrification of transportation is essential. Electric Road Systems are an important part of the solution to reduce emissions, and the Evolution Road project will provide crucial knowledge for this important mission, the Minister for Energy and Digital Development said at the inauguration.

According to Sweden’s climate goals, emissions from greenhouse gases from transportation should be reduced by 70 per cent by 2030, and these goals cannot likely be reached without large scale conversion to electric vehicles. The test sites for Electric Road Systems that are being conducted in Sweden are a first step to creating a charging infrastructure that enables the adoption of fossil-free and electric vehicles to reduce emissions. The Swedish Transport Administration has invested SEK 84 million in the Evolution Road project in Lund, Skåne, out of a total budget of SEK 96 million, to gain important knowledge about the technology, operations, maintenance and environmental impact.

– The Swedish Transport Administration congratulates Elonroad AB and Evolution Road for the excellent work that has been done to get this test facility in place and we are looking forward to take part in the test results and analysis of this exciting technology. This is an important step in the effort towards tomorrow’s fossil-free transportation system, said the Swedish Transport Administration’s program manager for Electric Roads, Jan Pettersson.

The Evolution Road project started in 2019 and continues until 2022. The first vehicle being used for the test is an electric bus from Solaris, that will run on the Electric Road one week per month. During the summer a visitor center will also be opened in Lund, to share more information about the project.

– We believe in this technology’s ability to make a significant impact and are looking forward to showcasing the benefits. This project would not have been possible without our partners’ support and hard work to get this Electric Road launched and inaugurated, said Per Löfberg, Project Manager for Evolution Road.

About the technology
The patented solution being tested in Lund was developed by the Swedish company Elonroad AB in collaboration with the Faculty of Engineering at Lund University. The technology enables charging for vehicles while parked or in motion. It supports most types of vehicles such as passenger cars, buses or heavy trucks – in urban environments or on freeways.

The Evolution Road project has been commissioned by the Swedish Transport Administration to build a test and demonstration site for Electric Road Systems. The purpose is to increased knowledge about electric roads and to explore the potential of wider use of Electric Road Systems as a complement in a future fossil-free transportation system. The project is made possible through a collaboration between nine partners: Elonroad AB, Innovation Skåne AB, Kraftringen Energi AB, Lund Municipality, Faculty of Engineering at Lund University, Ramboll, Skånetrafiken, Solaris Sverige AB and the Swedish National Road and Transport Research Institute, VTI. The Swedish Transport Administration is the main financier.